Watch my Youtube video talking about these books here!

This blog post is gonna be a LONG one. My Fall TBR is never ending. I keep adding to it every day but as of now, here’s what I want to read this fall:

I’m going to start off with the books I’ve already read on this TBR!

If you want to keep updated with my Fall TBR and how I’m doing, here’s my Goodreads list!

What are you reading this Fall?

School is back in session and I’m so thankfully not attending high school ever again! I decided I would talk about some of the required reading that I loved in high school because it seems as if most people hated the books they read in high school. For me, some of these books became my favorites.

I want to clarify that I went to school in Florida and I took mostly advanced English, AP Lang, and a dual enrollment college course in high school. This means my required reading might be a little different than what some people may have read in high school. For example, I never had to read To Kill a Mockingbird. I know, shocker right? I’ve never read Animal Farm either! So, if you’re wondering why I might’ve not mentioned one of your favorites or ones you remember, it’s most likely because I didn’t have to read them.

“Among Shakespeare’s plays, “Hamlet” is considered by many his masterpiece. Among actors, the role of Hamlet, Prince of Denmark, is considered the jewel in the crown of a triumphant theatrical career. Now Kenneth Branagh plays the leading role and co-directs a brillant ensemble performance. Three generations of legendary leading actors, many of whom first assembled for the Oscar-winning film “Henry V”, gather here to perform the rarely heard complete version of the play. This clear, subtly nuanced, stunning dramatization, presented by The Renaissance Theatre Company in association with “Bbc” Broadcasting, features such luminaries as Sir John Gielgud, Derek Jacobi, Emma Thompson and Christopher Ravenscroft. It combines a full cast with stirring music and sound effects to bring this magnificent Shakespearen classic vividly to life. Revealing new riches with each listening, this production of “Hamlet” is an invaluable aid for students, teachers and all true lovers of Shakespeare – a recording to be treasured for decades to come.”

Listen, I’m not a huge Shakespeare fan. But, I did read quite a few of his works throughout high school. I mean, didn’t we all? I’m pretty sure I had read: Romeo & Juliet, Othello, King Lear, and Hamlet. Hamlet was the last one I read since I read it in my Comp I class senior year of high school. When I tell you I loved Hamlet, I LOVED Hamlet. It’s actually on my Favorites list on Goodreads. Hamlet is such a great character. The play is actually intriguing, family drama, literally everyone dies, and it’s funny. What more could you ask for? Oh, and I know what he meant by “To be or not to be” now.

I also remember my English professor showing us this scene from the Simpsons to summarize Hamlet and it was golden. “Nobody out crazies Ophelia!” made me laugh so hard.

Among the seminal texts of the 20th century, Nineteen Eighty-Four is a rare work that grows more haunting as its futuristic purgatory becomes more real. Published in 1949, the book offers political satirist George Orwell’s nightmare vision of a totalitarian, bureaucratic world and one poor stiff’s attempt to find individuality. The brilliance of the novel is Orwell’s prescience of modern life–the ubiquity of television, the distortion of the language–and his ability to construct such a thorough version of hell. Required reading for students since it was published, it ranks among the most terrifying novels ever written.

I wanna say that I read this book during sophomore year of high school but honestly, I can’t remember a damn thing about high school. I just remember we read a lot of dystopian and the only Orwell thing I ever had to read was 1984. To be quite frank with you, I loved everything about this book. I read ahead like I usually do and I remember being excited for the discussions. I’m finally glad to understand this book and all the references made in 2019.

3. The Crucible by Arthur Miller 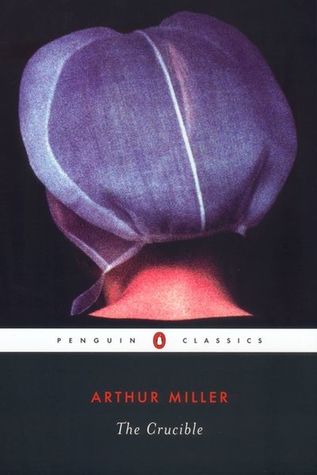 “I believe that the reader will discover here the essential nature of one of the strangest and most awful chapters in human history,” Arthur Miller wrote of his classic play about the witch-hunts and trials in seventeenth-century Salem, Massachusetts. Based on historical people and real events, Miller’s drama is a searing portrait of a community engulfed by hysteria. In the rigid theocracy of Salem, rumors that women are practicing witchcraft galvanize the town’s most basic fears and suspicions; and when a young girl accuses Elizabeth Proctor of being a witch, self-righteous church leaders and townspeople insist that Elizabeth be brought to trial. The ruthlessness of the prosecutors and the eagerness of neighbor to testify against neighbor brilliantly illuminates the destructive power of socially sanctioned violence.

Written in 1953, The Crucible is a mirror Miller uses to reflect the anti-communist hysteria inspired by Senator Joseph McCarthy’s “witch-hunts” in the United States. Within the text itself, Miller contemplates the parallels, writing, “Political opposition… is given an inhumane overlay, which then justifies the abrogation of all normally applied customs of civilized behavior. A political policy is equated with moral right, and opposition to it with diabolical malevolence.”

We actually read this out loud in class as if we were the cast of characters. I remember being picked to read Elizabeth and my only other friend in that AP class read John Proctor. I wasn’t usually excited to read aloud but it was so fun reading this play. Even though this events took place SO long ago, they were so fun to read about. I think I would probably re-read this today if I felt like it.

4. Into the Wild by Jon Krakauer 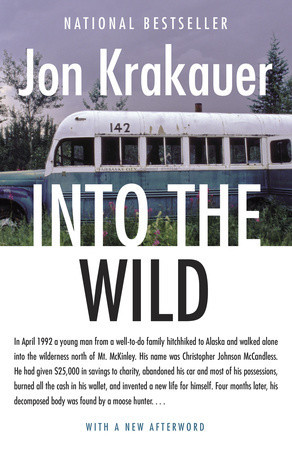 In April 1992 a young man from a well-to-do family hitchhiked to Alaska and walked alone into the wilderness north of Mt. McKinley. His name was Christopher Johnson McCandless. He had given $25,000 in savings to charity, abandoned his car and most of his possessions, burned all the cash in his wallet, and invented a new life for himself. Four months later, his decomposed body was found by a moose hunter. How McCandless came to die is the unforgettable story of Into the Wild.

Immediately after graduating from college in 1991, McCandless had roamed through the West and Southwest on a vision quest like those made by his heroes Jack London and John Muir. In the Mojave Desert he abandoned his car, stripped it of its license plates, and burned all of his cash. He would give himself a new name, Alexander Supertramp, and , unencumbered by money and belongings, he would be free to wallow in the raw, unfiltered experiences that nature presented. Craving a blank spot on the map, McCandless simply threw the maps away. Leaving behind his desperate parents and sister, he vanished into the wild.

Out of all the books I’ve read in my life, Into the Wild remains in the top three. It’s funny because I originally only rated this book four stars and in my review, I mentioned not loving it. It’s been a few years since I read this book (I think I read in it 2016?) and it still manages to stick with me. I think about it often and I like to re-read a few passages of this book whenever I’m feeling upset. I left this book feeling so much and learning so much from Jon Krakauer and Chris McCandless. This is my bookseller rec at work because I just want everyone to read it. I’ve seen the movie and it was okay but I’ll never forget the feeling of reading it for the first time. I love this book for so many different reasons — it’s so atmospheric, it reads like fiction even though it’s not, it brings up the topic of transcendentalism, and some of the writing is just truly unforgettable.

What was your favorite required reading? Sometimes they’re hit or miss but I ended up really loving these!