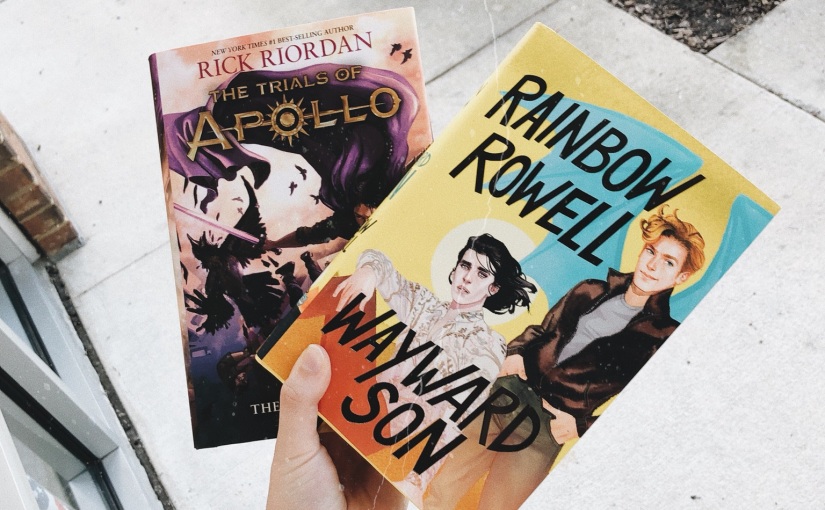 Happy release day Tuesday! So many lovely books are coming out this month and these are some of my most anticipated. Please note these are both sequels so there might be SPOILERS in the descriptions!

“The story is supposed to be over.

Simon Snow did everything he was supposed to do. He beat the villain. He won the war. He even fell in love. Now comes the good part, right? Now comes the happily ever after…

So why can’t Simon Snow get off the couch?

What he needs, according to his best friend, is a change of scenery. He just needs to see himself in a new light…

That’s how Simon and Penny and Baz end up in a vintage convertible, tearing across the American West.

They find trouble, of course. (Dragons, vampires, skunk-headed things with shotguns.) And they get lost. They get so lost, they start to wonder whether they ever knew where they were headed in the first place…

Come on, Simon Snow. Your hero’s journey might be over – but your life has just begun.”

Edition: Hardcover
Page Count: 368 pages
Published on: September 24th, 2019
ISBN: 1250146070 (ISBN13: 9781250146076)
I’ve already read some of Wayward Son because our copies were here early and it is EVERYTHING. I can’t wait to receive my copy in the mail and binge read it. I’ve been needing a new Rainbow Rowell novel.
If you want to follow along with my reading updates, here’s my Goodreads.

“In his penultimate adventure, a devastated but determined Apollo travels to Camp Jupiter, where he must learn what it is to be a hero, or die trying.

It’s not easy being Apollo, especially when you’ve been turned into a human and banished from Olympus. On his path to restoring five ancient oracles and reclaiming his godly powers, Apollo (aka Lester Papadopoulos) has faced both triumphs and tragedies. Now his journey takes him to Camp Jupiter in the San Francisco Bay Area, where the Roman demigods are preparing for a desperate last stand against the evil Triumvirate of Roman emperors. Hazel, Reyna, Frank, Tyson, Ella, and many other old friends will need Apollo’s aid to survive the onslaught. Unfortunately, the answer to their salvation lies in the forgotten tomb of a Roman ruler . . . someone even worse than the emperors Apollo has already faced.”

Edition: Hardcover
Page Count: 448 pages
Published on: September 24th, 2019
Publisher: Disney-Hyperion
ISBN: 1484746449 (ISBN13: 9781484746448)
I have yet to read the Trials of Apollo but I’m still excited for this release! I know how many people have been waiting for this book so I’m glad they’re all going to be receiving their copies soon! I can’t wait to read these books. I think I might re-read all of Riordan’s books in 2020!
Are you going to be picking any of these up? Let me know!