I have no idea if someone has already done this. I tried to check but didn’t see anything. So, here it is! A book tag based on Taylor Swift’s new album, Lover! If you end up doing this tag, please tag me. I want to see your answers!

Here are questions with no answers:

And now for my answers:

END_OF_DOCUMENT_TOKEN_TO_BE_REPLACED

I’m gonna have to give this one to Daisy Jones & the Six by Taylor Jenkins Reid! I really loved this book and how it was written. It’s different from what I usually read but I think that’s what makes it so good. I’m so excited for the adaptation! I have a review for it here.

Saga Vol. 9 was SO amazing. I am highly anticipating the next Saga release even though it won’t be for a while. I can’t believe they decided to go on hiatus after that ending! I have a mini review here.

3. New Release You Haven’t Read Yet, But Want To?

Aurora Rising by Amie Kaufman and Jay Kristoff! I recently bought it and everyone has been talking about it so I’m so excited to finally get around to it.

4. Most Anticipated Release For Second Half of 2019?

It’s probably Vengeful by V.E. Schwab. I really enjoyed Vicious but I wasn’t really a fan of this sequel. It was just okay. I love V.E. Schwab so much and I can’t believe there’s a book by her that I didn’t quite enjoy.

the Great Alone by Kristin Hannah honestly might make my top five for this year. I didn’t know what to expect going into this book but it really stuck with me.

Helene Dunbar! I recently read We Are Lost and Found by her and I absolutely LOVED it. I’ll have a review for it soon!

Kel from A Darker Shade of Magic. It’s not necessarily new but I love him SO much. Also, Holland.

Would it be weird to say Eli from Vicious? I really like his character!

We Are Lost & Found by Helene Dunbar! I cried so hard at the end of this book.

Book Love by Debbie Tung. It was literally the cutest thing I’ve read all year

12. Favourite Book To Movie Adaptation You Saw This Year?

I actually haven’t seen one yet!

I’ve never thought of a favorite review but maybe Daisy Jones & the Six?

14. Most Beautiful Book You Bought So Far This Year?

I pre-ordered Pumpkin Heads and I already know it’s the prettiest book I own.

15. What Books Do You Need To Read By The End of The Year?

Too many. Too many.

I found this tag over at the Bibliophagist‘s blog but it was originally created by Bibliomaniac Bookworm! Thank you to both for letting me find this insanely cute tag. 🙂

I recently read Autoboyography by Christina Lauren and I just don’t understand the hype. I wish I liked it more but it fell so flat for me. I hated the love interest and I thought the bi rep was questionable. The cover is beautiful, though.

a Darker Shade of Magic by V.E. Schwab doesn’t seem like a bad book but it was intimidating at the time. It’s my favorite series now, though.

I would have to say Turtles All the Way Down by John Green. I thought about this book for days after I read it. I think it was the last book to have such an affect on me. I have a review for it here.

I think maybe Priory of the Orange Tree by Samatha Shannon? I’m waiting for the paperback to come out but whenever I talk about wanting to read this book, people always mention the size of it and are surprised.

I tag whoever else wants to do it!

the Princess ➵ a book that is very popular and pretty on the outside, but you thought was uninteresting on the inside.

the Criminal ➵ a book that looks/sounds rough and bad, but ended up completely stealing your heart.

the Brain ➵ a book that made you think.

the Basket Case ➵ a book that people would call you crazy for reading.

As you all know, I recently just got a new job. I haven’t been able to go book shopping as often due to little or no paychecks. But, that doesn’t stop my book wishlist from growing. I decided to gather a list of books I want to get soon or that I’ve been wishing for. I got this idea from On The Bookpage! 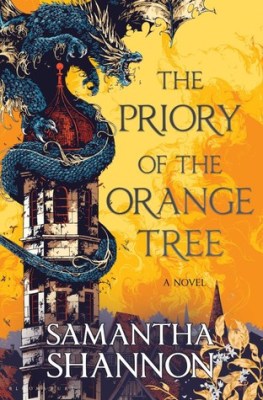 “A world divided.
A queendom without an heir.
An ancient enemy awakens.

The House of Berethnet has ruled Inys for a thousand years. Still unwed, Queen Sabran the Ninth must conceive a daughter to protect her realm from destruction—but assassins are getting closer to her door.

Ead Duryan is an outsider at court. Though she has risen to the position of lady-in-waiting, she is loyal to a hidden society of mages. Ead keeps a watchful eye on Sabran, secretly protecting her with forbidden magic.

Across the dark sea, Tané has trained all her life to be a dragonrider, but is forced to make a choice that could see her life unravel.

Meanwhile, the divided East and West refuse to parley, and forces of chaos are rising from their sleep.”

I’ve been seeing this book everywhere and it’s 100% my type of book. I love high fantasy and I’ve heard this book features LGBT+ main characters which is a double win. I’ve just been hesitant to buy this book because of the size and that it’s only out in hardcover. I like bigger books to be in paperback just because they’re easier to read and lighter. I have it on hold at my library and I’m supposed to get it soon so that’s exciting! Hopefully, I’ll have a review for this book soon.

“The year is 2380, and the graduating cadets of Aurora Academy are being assigned their first missions. Star pupil Tyler Jones is ready to recruit the squad of his dreams, but his own boneheaded heroism sees him stuck with the dregs nobody else in the Academy would touch…

A cocky diplomat with a black belt in sarcasm
A sociopath scientist with a fondness for shooting her bunkmates
A smart-ass techwiz with the galaxy’s biggest chip on his shoulder
An alien warrior with anger management issues
A tomboy pilot who’s totally not into him, in case you were wondering

And Ty’s squad isn’t even his biggest problem—that’d be Aurora Jie-Lin O’Malley, the girl he’s just rescued from interdimensional space. Trapped in cryo-sleep for two centuries, Auri is a girl out of time and out of her depth. But she could be the catalyst that starts a war millions of years in the making, and Tyler’s squad of losers, discipline-cases and misfits might just be the last hope for the entire galaxy.

They’re not the heroes we deserve. They’re just the ones we could find. Nobody panic.”

I love that Amie Kaufman and Jay Kristoff decided to write another book together after finishing the Illuminae Files. I loved Illuminae but sadly, I didn’t finished Gemina or get to Obsidio. I’m planning to finish the trilogy this year but still, I’m very excited for this new release! It’s seems like a fun, thrilling read.

“Paris in 1789 is a labyrinth of twisted streets, filled with beggars, thieves, revolutionaries—and magicians…

When smallpox kills her parents, Camille Durbonne must find a way to provide for her frail, naive sister while managing her volatile brother. Relying on petty magic—la magie ordinaire—Camille painstakingly transforms scraps of metal into money to buy the food and medicine they need. But when the coins won’t hold their shape and her brother disappears with the family’s savings, Camille must pursue a richer, more dangerous mark: the glittering court of Louis XVI and Marie Antoinette.

With dark magic forbidden by her mother, Camille transforms herself into the ‘Baroness de la Fontaine’ and is swept up into life at the Palace of Versailles, where aristocrats both fear and hunger for la magie. There, she gambles at cards, desperate to have enough to keep herself and her sister safe. Yet the longer she stays at court, the more difficult it becomes to reconcile her resentment of the nobles with the enchantments of Versailles. And when she returns to Paris, Camille meets a handsome young balloonist—who dares her to hope that love and liberty may both be possible.

But la magie has its costs. And when Camille loses control of her secrets, the game she’s playing turns deadly. Then revolution erupts, and she must choose—love or loyalty, democracy or aristocracy, freedom or magic—before Paris burns…”

I would love to read a book set in France, especially in an earlier time period. I’ve had my eye on this book since the release but for some reason, I just haven’t bought it yet! I plan to read it for my 2019 TBR though.

What books are on your wishlist and why? Let me know!