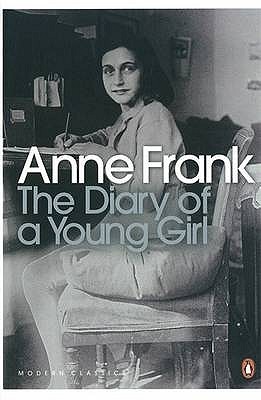 The Diary of a Young Girl by Anne Frank

“Anne Frank’s The Diary of a Young Girl is an inspiring and tragic account of an ordinary life lived in extraordinary circumstances that has enthralled readers for generations. This Penguin Modern Classics edition is edited by Otto H. Frank and Mirjam Pressler, translated by Susan Massotty, and includes an introduction by Elie Wiesel, author of Night.

In Amsterdam, in the summer of 1942, the Nazis forced teenager Anne Frank and her family into hiding. For over two years, they, another family and a German dentist lived in a ‘secret annexe’, fearing discovery. All that time, Anne kept a diary. Since its publication in 1947, Anne Frank’s diary has been read by tens of millions of people. This Definitive Edition restores substantial material omitted from the original edition, giving us a deeper insight into Anne Frank’s world. Her curiosity about her emerging sexuality, the conflicts with her mother, her passion for Peter, a boy whose family hid with hers, and her acute portraits of her fellow prisoners reveal Anne as more human, more vulnerable and more vital than ever.”

“In 2010, the Culpeper County, Virginia school system banned the 50th Anniversary “Definitive Edition” of Anne Frank: The Diary of a Young Girl, due to “complaints about its sexual content and homosexual themes.”[45] This version “includes passages previously excluded from the widely read original edition…. Some of the extra passages detail her emerging sexual desires; others include unflattering descriptions of her mother and other people living together.”[46] After consideration, it was decided a copy of the newer version would remain in the library and classes would revert to using the older version.

In 2013, a similar controversy arose in a 7th grade setting in Northville, Michigan, focusing on explicit passages about sexuality.[47] The mother behind the formal complaint referred to portions of the book as “pretty pornographic.”[48]

The American Library Association stated that there have been six challenges to the book in the United States since it started keeping records on bans and challenges in 1990, and “Most of the concerns were about sexually explicit material”.[46]  (Source)”

I found this interesting! I wouldn’t of guessed her diaries were banned but apparently, they are. If you’re interested, I also recently found out that Anne Frank wrote about liking girls?! Here’s that article.

If you’re looking for a quick read about Anne Frank, the illustrated edition of her diary is wonderful. Here’s the Goodreads link.

One thought on “Banned Book Recommendation | DAY ONE”